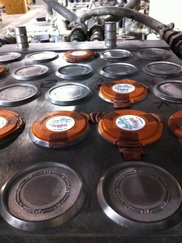 Key West chips in the mold
Key West Resort & Casino chips are real clay casino  chips made by Classic Poker Chips. They've been making table chips for casinos and for home players for over 100 years, and were the original supplier of gaming chips to most casinos on The Strip in the early days of Las Vegas.  The company still makes real gaming chips for casinos using the same machines, materials and process to make our Key West chips.

At their manufacturing facility in Portland, Maine, Classic Poker Chips uses a trade-secret formula of clay and other materials to create chips in the standard size - 39 mm. They do much of the work by hand, using the same 100-year-old mold for our chips as they did to make some of the most famous and valuable casino chips in gaming history. The photo above shows some Key West $5,000 chips in the mold, before their final pressing. Cameras (and visitors) are off-limits at the factory, and this photo, supplied to us by the company's owners, is the only one known to exist of the process. We were given special access to the facility in September, 2013. without cameras, for a tour and demonstration.

Traditional chips made with a traditional process
Much of the work at the factory hasn't changed in over 100 years. The ingredients are mixed for create a large batch of chip clay in a specific color, then pressed into sheets of standard thickness. When the clay cools, it's punched into "slugs," blank discs that will become our Key West chips. The spaces for the edge spots are cut out by hand, and the edge spot clay is mixed, pressed and punched to fit the spaces.

The slugs are placed into Key West's H mold, two steel plates with the chip design repeated 25 times -- five rows of five chips. The slugs are pressed in the mold under high pressure and temperature for a specific time. When they're finished and given a chance to cool, some of the clay is removed from the center. An epoxy is applied to the inlay and it's placed into the center of the chips, and they're pressed again, bonding the inlay into the chip.  Key West chips have a true inlay -- not a label -- that won't come off without destroying the chip.

The chips are cleaned, polished and inspected at the factory, then shipped securely to the Key West Resort & Casino.

Key West quarters drying after being cleaned.
Quality Control at Continental Card & Game Co.
When they arrive at our office, the chips are packed in 100-chip blank cardboard boxes, and still have some "factory dust" on them from the process. We initially inspect every chip, and return any that don't meet our quality standards. (As it turns out, very few are returned.)

Before they're shipped to our customers, the chips are cleaned and inspected again.
We check:

We use only one standard to judge when our chips are ready to ship:  If we wouldn't put it on our table, we won't put it on yours.
The history of Classic Poker Chips

﻿Classic Poker Chips is the current incarnation of a business that has been making professional quality casino chips in America for over a century. They've gone through a few names over the 102 years, and were originally called the Portland Billiard Ball Company (1912 - 1935), then the Burt Company (1935 - 1988), and Atlantic Standard Molding (1988 - 2012).
When ASM's longtime owner, Jim Blanchard, retired in 2012, the company was briefly called American Standard Molding by its business partners -- who would keep the company for a little over a year. In December, 2013, what was ASM was purchased by David Spraag and David Sarles. Both men are well-known in the casino chip world for their leadership of the Casino Chip & Gaming Token Collector Club, and each is an expert in his own right. They convinced Jim Blanchard to come out of retirement to supervise day-to-day casino chip production, insuring that Classic Poker Chips continue the tradition of excellence that has been the company's reputation for more than a century.﻿
The Key West Resort & Casino  is not a real casino, and does not operate any gaming operation, on the web or elsewhere. It's a line of fine gaming equipment made by casino industry manufacturers for Continental Card & Game Co., Wilmington, Delaware. The Key West Resort & Casino logo is is a trademark of Continental Card & Game Co., and is protected by U.S. and international copyright laws. The Continental Card & Game Co. complies with the requirements of 15 USC § 1173. Click to visit Key West's Responsible Gaming page.